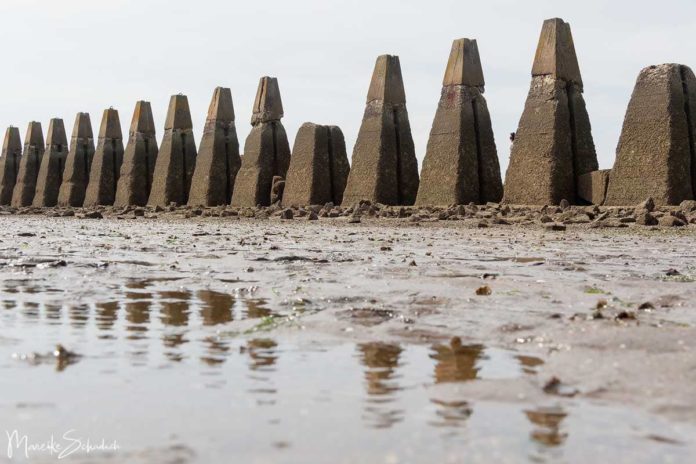 Scotland. The deserted island of Cramond is one of my favorite places near Edinburgh. The combination of wild nature, a bizarre boat barrier and bunkers from the Second World War creates a unique atmosphere. Cramond is perfect for a trip from Edinburgh and a great break from the sightseeing in the city. Here you can find out everything you need to know for your trip to the "ghost island of Cramond" near Edinburgh, including many practical tips.

Where is Edinburgh's Ghost Island Cramond?

Cramond Island is one of several islands in the Firth of Forth near Edinburgh.It is about 500 meters long and has an area of 7.70 hectares. As a tidal island, Cramond is connected to the mainland at low tide and can be reached either through the mudflats or via a concrete walkway about 1.1 km long.

What is there to see on the Ghost Island Cramond?

Today the island is deserted, but in both world wars it was part of a network of gun batteries and searchlights on the Fifth of Forth.The aim was to protect the anchor bay and the naval base Rosyth from enemy attacks. Most of the buildings you can see on the island date from the Second World War.

The island is often called ghost island. But I have not been able to find any ghost stories that directly affect the island. So the name is more likely based on the fact that the island is deserted and no longer used by humans. Except as a destination for excursions.And as such it is very popular especially with locals. For tourists, however, it is rather an insider tip.Because most people concentrate more on the well-known highlights in the old town of Edinburgh, a trip to Cramond Island is on the to-do list for few.

Strange Wall made of Concrete Teeth

The dam that connects the island with the mainland is lined with concrete teeth. These massive piers stand close together and are a good 4 meters high. They stand out from afar and are among the most bizarre things you can see in Scotland. A "must see" for all lovers of lost places and photographers. I couldn't stop photographing the concrete pillars from all imaginable angles.

The pillars are a relic from the Second World War. They are part of a larger boat barrier, which included submarine nets. The purpose of the concrete teeth was to prevent enemy torpedo boats from passing through to the anchorage bay and the naval base Rosyth. On their sides, narrow slits can still be seen, in which concrete beams formed a continuous wall. The barrier is often called a submarine barrier. But the barrier was intended for normal boats, because the water here is not deep enough for submarines.

Relics from the Second World War

Besides the bizarre boat barrier, there are other relics from the Second World War on the island, including several bunkers. But the island was already used for military purposes in the First World War Already in 1914 a submarine network was stretched from Cramond Island via Inchmickery to Inchcolm Island and the coast. Gun emplacements were also set up on the three islands.

In the Second World War the fortifications were further expanded. On the south side of the island, just behind the dam, there is a big brick building. Here a 75 mm cannon and a searchlight were installed. On the north side of the island you can explore more bunkers from the inside and outside. The positions here once guarded the Fifth of Forth. Beside the bunkers you can also see the curved Rails of a twin six-pound gun. .

The gray concrete is now also used by graffiti artists. The colors and the blooming flowers around the bunkers give a great contrast.

From the north side of the island you also have a good view of the neighboring Inchmickery Island (the ‘Battleship’ Island)which was also expanded during the Second World War for defense purposes. There are even more bunkers and other buildings on it than on Cramond. Between Cramond and Inchmickery there was a submarine network during the war. You can see the attachment point for the net in front of the shore at low tide.

Inchmickery Island is now a bird sanctuary. With a boat tour will get a little closer. Because of Covid-19 the tour was unfortunately not offered during my stay.

Ruin of the old Farm of Cramond

Sheep were already being kept on the island of Cramond in the 1790s. In the middle of the island, the ruins of a farmhouse still testify to the former agricultural use.

The farmhouse is already marked on a map from 1853, but it may be even older. Part of it was rented out as a vacation home. After the farmer died in 1904, one family even rented the whole island as a vacation home. Sheep were kept on Cramond until the 1960s. Today the ruins of the house are hidden in the small wood in the middle of the island.

Viewpoint with a View to the Forth Bridges

From the highest point of the island you have a great view of the Fifth of Forth. You can even see the famous Forth Bridge, which was opened for trains in 1890. In the other direction, the skyline of Edinburgh rises with the Granton Waterfront and the historic Gasometer from 1903.

Numerous snails and various types of shells can be seen in the mudflats. Most however only as empty shells. The stones are overgrown with seaweed. They must look beautiful under water.

A walk through the mudflats is something very special. Rubber boots or at least waterproof shoes are helpful. The mudflats are very soft in places and you sink deeply.

I was just about to clean my shoes in one of the tide pools when I discovered a small octopusin the water. I was quite amazed and forgot my dirty shoes immediately. He was sitting motionless in the water. Normally the octopuses adapt to their environment in color, but this one was all white. The octopus was no longer alive. Maybe the tiny pool had become too warm and too low in oxygen. Poor guy, I felt sorry for him. But still - he was so beautiful to look at.

Tip: from the middle of August the blackberries are ripe, they grow especially close to the north side of the island, next to the small asphalt road.

What else is there to see?

The small village of Cramond is one of the most important archaeological sites in Scotland. Already in the Mesolithic Age people lived in and around Cramond. Later Cramond became an important Roman settlement with a large fortress. The foundations of the fortress are still visible next to the church. Today Cramond is a beautiful example of an 18th century Scottish village. Among other things you can see an old church with a cemetery, old mansions, the ruins of two water-powered mills and a small harbour.

You can find out more about Cramond's history in the information flyers on the Cramond Association website.

If you follow the coastal path to the east, you will come back to the city of Edinburgh. I walked the distance to Princess Street Garden in about 2.5 hours. Most of the time I could still walk in the mudflats, later I walked the coast path.

Directions to Cramond Island from Edinburgh

The island of Cramond can be reached quickly and easily from Edinburgh - just perfect for a day trip! Bus number 41 runs every 20 to 30 minutes between the center of Edinburgh and the village of Cramond.The journey from Queensferry Street to Cramond (Cramond Glebe Road stop) takes about 20 minutes, from Waverly Station about 40 minutes. A single ticket costs 1.80 Euro and can be bought from the bus driver with a credit card or in coins.

If you come by car, take Cramond Glebe Road. Shortly before the end of the road, a parking lot branches off to the right. On weekends it can get crowded, so it is best to arrive early.

There is a public toilet and an ice cream van at the starting point of the hike. Opposite the small harbour there is a small bistro and a little above the parking lot is the Cramond Inn.

When is the Dam to Cramond Island accessible?

Cramond Island can only be reached via the dam at low tide. The Coast Guard recommends that you only walk around the dam during the four hours around the lowest water level. There is a list of safe times on the website of the Royal National Lifeboat Institute Queensferry. A sign in front of the dam also indicates the earliest possible crossing (starting from the mainland) and the latest return (starting from the island). There is also an emergency phone number in case you do not return in time.

You want to know where the journey goes? Then I recommend the following travel guides, which have proven themselves on my trip:

Which is your favorite destination for a trip out of Edinburgh - also the island of Cramond? How did you like it? Do you have any questions or suggestions regarding my article? If so, please write me a comment!

Do you love lost places and bunkers as much as I do? Then you might also be interested in my articles about Lost Places in Berlin and Brandenburg or about a trip to the Döberitzer Heide - an old Military Training Area near Berlin.

Fimmvörðuháls - Trekking on the Lava of Eyjafjallajökull

Discovering the Slowness - Hiking at the Tasermiut Fjord

Pompeii of Iceland - Excursion to Eldfell Volcano of Vestmannaeyjar

Nice to have you drop by! I'm Mareike. Nature lover, outdoor enthusiast and passionate photographer. Welcome to my travel blog! Learn more about me and my blog here.

Have a look at the site of Regine Schadach. You will see a collection of fantastic pictures: animals, plants, mushrooms and mosses, landscapes and biotopes.

Some of my posts contain so-called affiliate links. These are marked with *. If you buy a product through one of these links, I get a small commission and you help me to keep filling Fernweh-Motive with interesting content. The product will not be more expensive for you and you do me a huge favor.

The most Popular Posts

Do you want to support Fernweh-Motive?

Then it would be great if you book your next accommodation via this link*. Thank you very much! You prefer to sleep in a camper? Then you should get to know Paul Camper*.